The Common Grackle is a large blackbird that tends to be taller and longer than most of its kind. Their tail is nearly half their length, and they have a unique color pattern. These birds would appear black from afar, but getting near them, you will notice a brassy bronze color with a bit of green, blue, or purple iridescence.

They are unique-looking birds and are not usually welcomed by homeowners as they tend to dominate the bird feeders. They are also considered agricultural pests as they eat many crops, especially corn.

In this article, we are going to cover a wide variety of topics related to the Common Grackle, such as:

Let’s jump right into it and learn more about the Common Grackle.

How To Identify A Common Grackle

Common Grackles are large blackbirds with strong legs and a long tail. What’s interesting here is that their tail makes up nearly half of their entire length. You’ll also notice that they have a flat head and a long, downward curved bill.

These birds appear black from afar, but it’s glossy. Their plumage is a combination of purple, blue, or green (on their heads) and bronze (on their bodies). Their eyes are pale yellow that contrasts nicely with their dark colors. 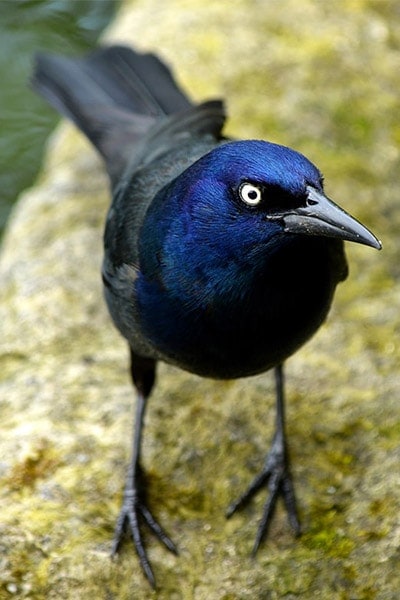 Common Grackles retain their glossy black plumage throughout the year. However, it has been noted that Common Grackles’ plumages in different parts of North America differ – bronze iridescence, purplish iridescence, and green iridescence. So, depending on where you are, you might see a different color pattern for these birds.

Where You’ll See A Common Grackle

These birds live in various environments, may it be human landscapes or natural habitats. Typical habitats where you’ll find the birds are in open woodlands, forest edges, swamps, marshes, meadows, and grasslands. They can also be found in agricultural fields, public parks, suburbs, pine plantations, and many more.

As long as there are scattered trees for nesting and open ground where they can search for food, you’ll find these birds.

Common Grackles are said to be resident or short-distance migrants. Those in the southern part of North America mainly stay there throughout the year while northern populations migrate.

These birds migrate in flocks, and it usually starts late in August, but the majority of the birds leave around October or early November. Then around mid-February to March or early April, the birds start arriving in the breeding areas. Common Grackles are referred to as opportunistic feeders because their diet depends on what food they’ll find. So, most of the time depends on what is most abundant in a certain season.

If it’s the breeding season, the birds will eat insects and other invertebrates most of the time. This includes small fishes like goldfish and crayfish, small frogs, salamanders, rodents, and sometimes small bats. They also eat beetles, grasshoppers, spiders, worms, and caterpillars.

During winter, the birds would mostly eat seeds. Most of the time, it’s agricultural grains like corn and rice. They also eat sunflower seeds, acorns, sweetgum, and a lot more. They also eat fruits.

So, since these birds eat whatever they could find, they would also sometimes eat garbage. They search for food mostly on the ground and sometimes in shallow waters (where they get fish) and trees.

There are also instances when they steal food and various items from other birds or nests. Common Grackles usually nest by forming small colonies of up to 30 birds, and pairs are usually monogamous. Once a pair forms, the female chooses the nesting site and sometimes ends up choosing more than just one site to build a nest.

It seems that these birds don’t have a particular area they love. Some birds opt to build nests on high coniferous trees, others in low vegetation, and some even build their nests in water. On rare occasions, there are nests in birdhouses, woodpecker holes, barns, and even nests that are still occupied.

Once the nest site is decided, the female Common Grackle usually takes up to six weeks to finish, especially if they keep changing sites. Males also help sometimes and do the repairs.

Nests built by females are usually large and bulky. The foundation is mainly made of weeds, grasses, twigs, and feathers and then lined with mud and fine grasses or horsehair.

Common Grackles are known to be very sociable birds. Whether it’s winter or summer, the birds gather together, and their numbers sometimes reach up to a thousand. Sometimes, they even gather with other bird species like the red-winged blackbirds and European starlings.

Even those who are breeding often gather in one colony. But, they can be very territorial when they are around their nest sites. There have been times where Common Grackles attack their kind and other bird species and also eat eggs and nestlings of other birds.

These birds are known to be loud and very noisy. They can also be very dominant and push aside other birds to get food at bird feeders.

Tips for Birdwatchers On How To Attract Common Grackles

Common Grackles are frequent visitors of bird feeders. Not everyone wants to attract them because they tend to dominate over other birds. However, if you’re going to attract these species, all you need is to set-up your backyard with all their needs.

If you want them to nest, you can also plant trees or low shrubs where they can start breeding. And don’t forget to have some water ready that they can drink or bathe into.

Threats To The Common Grackle Common Grackles are very widespread across North America. One biggest threat to their population is humans, who kill them as they are considered agricultural pests. On top of that, they also have many predators like squirrels, chipmunks, snakes, hawks, owls, and domestic cats.