American Robin is a widespread songbird you’ll likely find in open areas where there are many worms. You’ll easily identify them for their rusty or orange breast, black or gray back, and their cheerful song. You may also notice them come in flocks right at the end of winter to welcome spring.

In this article, we are going to cover a wide variety of topics related to the American Robin, such as:

Let’s jump right into it and learn more about the American Robin.

How To Identify An American Robin

You’ll be able to easily identify an American Robin from their fairly large and round body with long legs and a long tail. The birds come with a brown and gray color pattern, where male American Robins are brightly colored than females. We’ll be explaining the difference between male and female American Robins below.

Male and female American Robins generally look the same but differ a lot in colors.

An adult male American Robin is easily recognizable from their dark head and a rusty-brown belly. The bill is yellow-colored, and you’ll notice some streaks of black on their throat. Females, on the other hand, are generally paler. They have gray heads and bellies that appear to be of orange color.

Regardless of whether it’s summer and winter, there would be no difference in American Robins’ plumage throughout the US. American Robins are very common birds you’ll find in any place throughout North America. They can easily be seen anywhere from lawns to fields to city parks. If you go to wilder places like woodlands, forests, and mountains, these birds would be there, too.

American Robins are what we consider resident or short-distance migrant birds. This means it’s either they stay in one area, or they just fly north or south, depending on where there’s a large food supply.

These birds often arrive at the start of the warm weather, spring. However, not all American Robins fly away or migrate during winter. If the food supply is enough, like there are many berries around, they typically stay. And they are mostly spread out, so there’s enough supply for all.

Birds that choose to migrate mostly fly southward. However, the purpose is not to escape winter but to be in an area where there’s more food – earthworms and insects. This is especially for birds who would undergo breeding as they need these nutrients for their young. 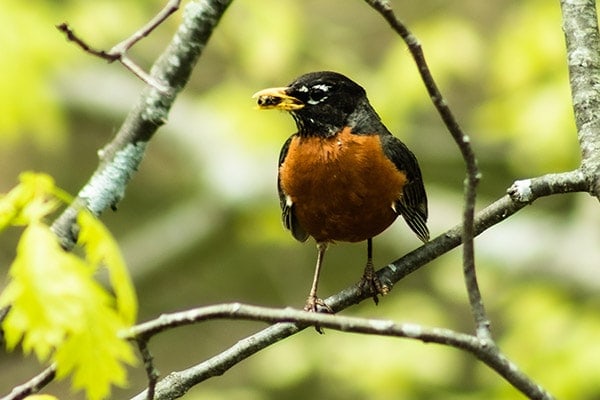 American Robins are said to be omnivores. So, they have a wide variety of food choices that changes depending on the season, their habitat, and food availability. A robin’s diet would include:

Here’s what they usually eat in a specific season:

The reason mollusks and insects are more in spring is that they need adequate nutrients for egg formation. It’s also a perfect source of protein for their hatchlings.

Besides the season, time of day is also a factor in what the American Robins would eat. If the ground is wet in the morning, they would likely eat insects. But once it’s no longer easy to get insects from the ground, they’ll settle for berries and fruits.

It’s the females who choose where to build the nest, and they’re also the ones who construct it. The nest is shaped like a cup and is built from the inside out. The cup shape inside is formed using grasses, twigs, paper, feathers, and moss.

Once they have achieved the cup-shape, it’s then held together by a layer of mud. The lining is then made of fine dry grass.

American Robins spend most of their day feeding and foraging on the ground. They usually hop around the grass or fly just a little high above the ground, searching for worms. There are also times where they fight with other birds for food.

During winter, American Robins are social birds and usually gather in large groups. They spend time in trees, and once the sun rises, they fly around again in search of berries and fruits. However, once the breeding season starts, they become great defenders of their territories.

If you want to hear a happy song, watch out for the male American Robins’ bird call before and after sunrise. Most people say that it almost sounds like someone telling you to “cheerily cheer up”.

Tips for Birdwatchers On How To Attract American Robin

American Robins are beautiful songbirds you can easily attract to your backyard. Unlike most birds, you can’t simply draw them in with bird feeders. Instead, you should make your home earthworm friendly and plant some of their favorite fruits and berries to eat.

Some trees and shrubs you can plant are Winterberry, Huckleberry, American Elderberry, Hawthorn, and many more. American Holly, Eastern Hemlock, and Eastern White Pine are also perfect if you want to attract them to nest in your backyard.

You can also plant flowers and vines to attract these birds like the Partridge Berry, Wildberry, Wild Grape, Pokeweed, and Virginia Creeper. If you want to use feeders, you also can, but it should be the type that can hold mealworms.

Don’t also forget to have a birdbath set-up for the birds’ drinking water.

Thanks to the US Migratory Bird Protection Act’s protection, American Robins now belong to the “Least Concern” conservation group. There was a time when their meat was considered a delicacy in some southern states, but that’s already part of the past.

Now, one main threat to the birds’ population are predators like cats, crows and jays, hawks, and snakes. At the same time, American Robins are vulnerable to pesticides spread on lawns when they find food on the ground.